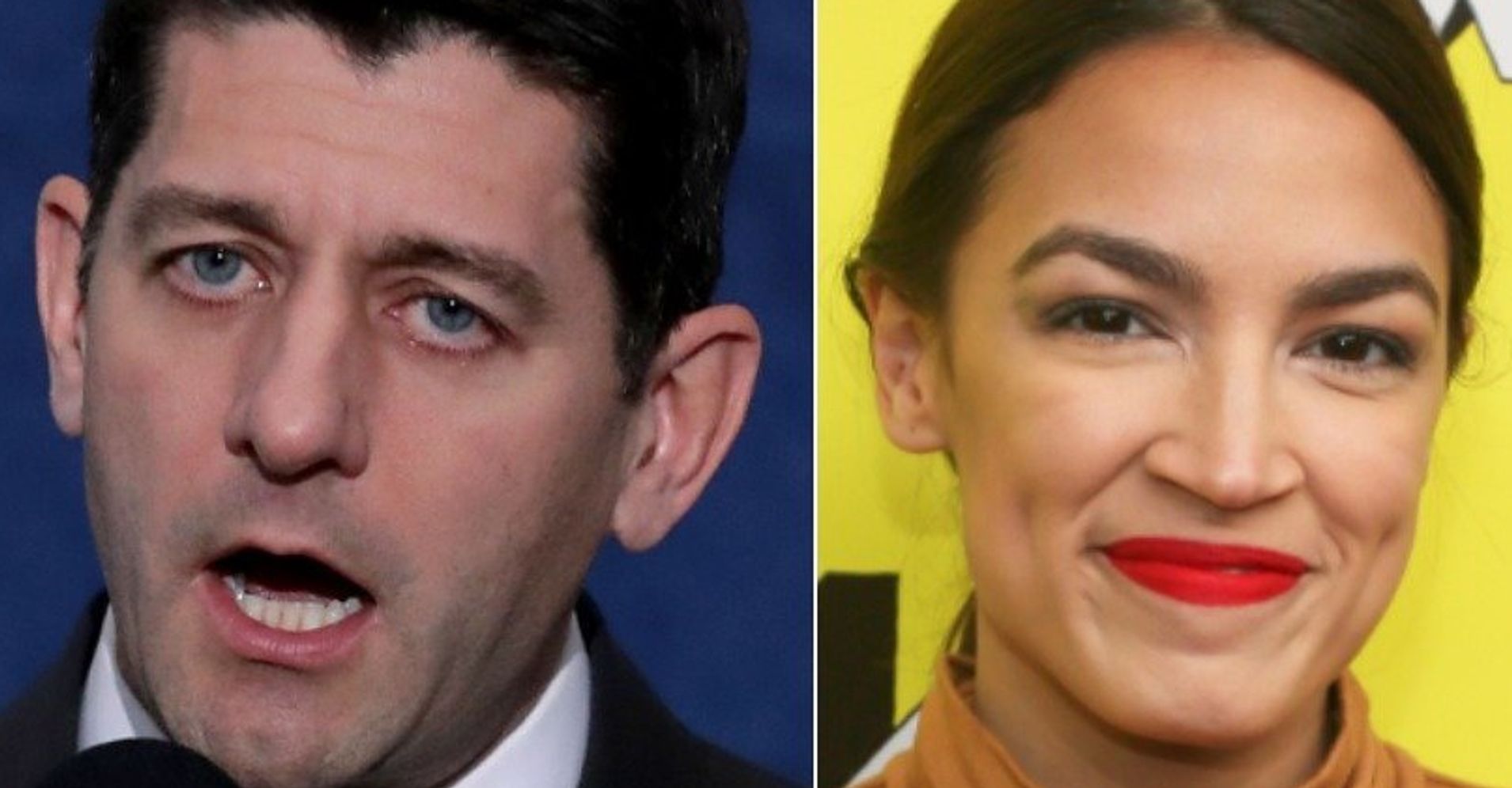 Former House Speaker Paul Ryan’s (R-Wis.) revelation that Rep. Alexandria Ocasio-Cortez (D-N.Y.) ignored his “few little tips” on how to be “a good member of Congress” has set Twitter alight.

Ryan said Tuesday during a dinner in Janesville, Wisconsin, that he attempted to give the 29-year-old lawmaker some advice about how to act when arriving at Congress.

“I talked to her, AOC, everybody calls her AOC. She’s the youngest person now there and I gave her just a few little tips on just being a good member of Congress, new,” explained Ryan, who was elected to the House when he was 28.

“I don’t think she really listened to a thing I said,” the former vice presidential candidate added with a laugh. He said he had advised Ocasio-Cortez to “take it easy, just watch things for a while, don’t ruffle, you know, see how it works first.”

Ocasio-Cortez hasn’t laid low as a representative ― her first few months have included fighting for the Green New Deal and grilling Michael Cohen during a Senate hearing. Ryan has left Congress and has joined the board of directors of Fox Corporation.

Check out Ryan’s comments from the 14-minute mark here:

And check out some of the mocking reactions, including one from “The Late Show” host Stephen Colbert and others who accused Ryan of “mansplaining”:

Paul Ryan says AOC didn’t listen to his career advice. I know how he feels. LeBron James won’t take notes from me.

You know what’s better than Alexandria Ocasio-Cortez not listening to a thing Paul Ryan said?

The fact that none of us have to listen to a single thing he says ever again.

Paul Ryan is every mansplainer and AOC is every woman who refuses to listen to that nonsense. Can I get an amen?!? 🙏🏻🙏🏻

Paul Ryan seems genuinely upset that @AOC wouldn’t let him mansplain being in Congress to her. Probably had to rush straight to his gym to explain to a female bodybuilder how she was lifting incorrectly. pic.twitter.com/SC0xbgJYqU

Paul Ryan is complaining that Alexandria Ocasio-Cortez hasn’t taken his advice about how to conduct herself as a new congresswoman.

Paul, it may be because you were the worst Speaker of the House in history. If someone flunks a class, you don’t ask to copy their notes.

It’s like they’ve run out of good propaganda creators and now they’re just phoning it in.

Personally, I would only take weightlifting tips from Paul Ryan but that’s just me. https://t.co/HobWdp0iZc

Because if there is anyone AOC should be taking advice from it’s Paul Ryan who is BELOVED by many people. https://t.co/8k4UsIsEIe

Even conservatives secretly admit at D.C. cocktail parties that Paul Ryan was the worst Speaker in recent history and maybe all-time. The idea that @AOC should sit at his feet, kindergarten style, eagerly awaiting his wisdom, is beyond laughable.

In a way Paul Ryan’s advice is incredibly valuable: Whatever he’s telling you, make sure you always do the opposite.

Nobody should listen to Paul Ryan: a bipartisan thought.

Paul Ryan? Never heard of him.

Me: Why is Paul Ryan trending?
Me: [checks why Paul Ryan is trending]
Me: [indistinct cursing]
Me: [cursing at Ryan like he just reneged]
Me: [clicks around trying to figure out how to challenge Ryan to a fight.]
Me: [tries to be like AOC and just ignore this fool.]

Somebody tell Paul Ryan you can’t soul search without a soul to search in.

Paul Ryan desperately needs to find out he’s irrelevant and always has been.

It takes a special kind of arrogant man to assume that any advice he gives is wanted and should be revered/followed without question. Paul Ryan must feel his irrelevance solidifying if he’s complaining about nonsense like this.

Paul Ryan says @AOC didn’t listen to a word he said, when he offered advice to her. Another thing AOC did right! 🇺🇸

Paul Ryan tried and failed to take away healthcare from millions of Americans. Paul Ryan orchestrated the tax cut for the rich. Then he ran away like a coward and retired.

I imagine AOC doing this as Paul Ryan was trying to give her advice. pic.twitter.com/Yl9N7jBYdh