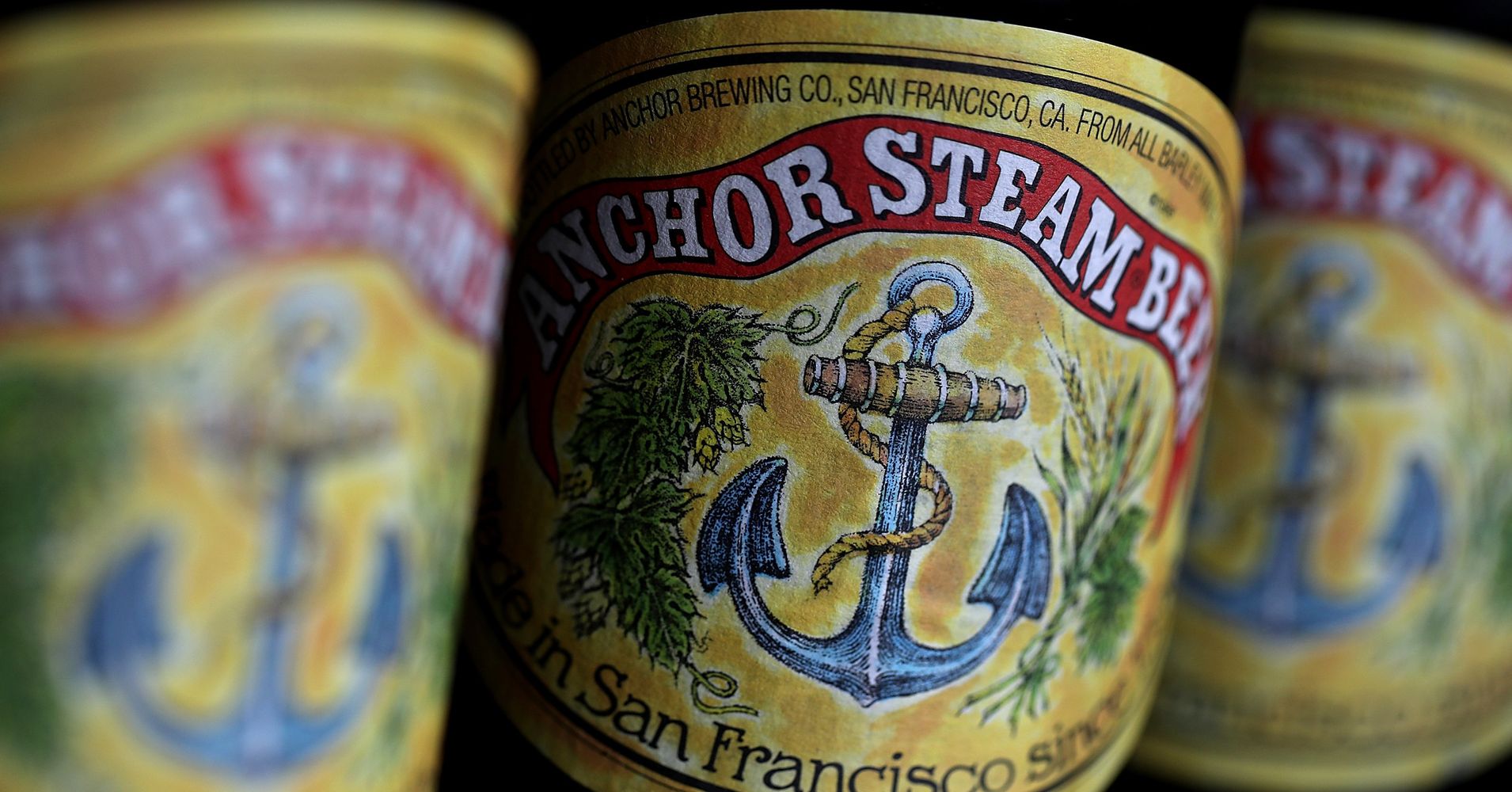 Since mid-February, managers at Anchor Brewing Co., the San Francisco icon that industry insiders consider the birthplace of American craft beer, have promised to remain neutral as 70 workers decide whether to unionize with the International Longshore and Warehouse Union.

But in that time, the company has conducted an escalating campaign of anti-union tactics, from declining to recognize the union and hiring a high-powered corporate employment lawyer, to spreading disinformation and barring pro-union buttons in the workplace. Following a late February electrical fire at the 123-year-old company’s brewery on Potrero Hill, which Japanese macro-brewer Sapporo Holdings acquired in 2017, management successfully petitioned to postpone workers’ vote for a week, until March 13.

Workers say the company has used that additional time to ramp up union-busting efforts, including intimidating private discussions and warnings of wage freezes. Some workers wondered if the fire ― described in the local news as “small” and responsible for a ”minimal amount of damage to a single room” ― was the reason for the extension.

“We would have been fully capable of holding the vote as scheduled,” said Garrett Kelly, a full-time Anchor fermentation worker helping organize the drive, via text message. “Management is simply not letting a good crisis go to waste.”

Voicemails left at Sapporo USA’s office in New York City were not returned, nor was an email to Sapporo Holdings’ Japanese headquarters. Anchor Brewing referred inquiries to its public relations firm, Dog and a Duck, where a spokesperson declined to comment before publication.

Though there are more than 7,000 craft breweries nationwide, almost none of them have unionized workers. This is partly due to economics  ― most craft breweries have small workforces and profits ― and it’s partly due to pragmatism, as a bunch of small shops are tougher targets for labor organizers than a single big one. (Anheuser-Busch InBev, MillerCoors and other macro-brewers mostly rely on unionized workforces. At least some of Sapporo’s global subsidiaries do, too.) Anchor’s drive is historic because it’s one of the first organizing efforts at a craft brewery, one that could have broader implications for the industry.

We would have been fully capable of holding the vote as scheduled. Management is simply not letting a good crisis go to waste.
Garrett Kelly, Anchor Brewing fermentation worker

The union drive at Anchor is a strength test for the $26 billion craft beer segment’s ethical “brand.” Drinkers have long celebrated craft brewers’ community-focused, quality-before-profit business models as a moral antidote to the corporate scourge of Big Beer, even though treatment of labor in the category has sometimes lagged. (Whether acquired breweries like Anchor are still “craft” is a semantic debate within the beer industry, but its output and positioning evoke a mid-sized regional craft brewery.) It’s also tapping into simmering socioeconomic conversations in the Bay Area, where the skyrocketing cost of living has increasingly been viewed as a cautionary tale of America’s record-breaking wealth inequality. Nationally, the outcome of the Anchor vote may galvanize workers in the broader food service industry, where organized labor has been anemic despite stagnant wages and bad conditions.

And yet the Anchor drive has been arduous. Groups of workers began discussing the idea nearly a year ago. On Feb.  7, an ILWU organizer delivered brewery management a letter that 39 of Anchor’s 72 production workers, tour guides and barroom staffers had signed requesting voluntary recognition.

In the weeks since then, Anchor managers have conducted a campaign that workers say violates the company’s stated neutrality. On Feb. 13, HuffPost learned that Anchor had retained the firm Hirschfeld Kraemer, where Stephen Hirschfeld, one the country’s “most powerful corporate employment lawyers,” is a founding partner. (Hirschfeld did not respond to phone or email requests for comment.)

Anchor made its neutrality statement to workers at an all-hands meeting on Feb. 14 but soon pressured the 61 brewery workers and nine staffers at Public Taps, its bar across the street, to separate into distinct bargaining units. Workers in both shops say they will bargain in parallel for identical contracts under the ILWU. (Of the original 72, two Public Taps workers were ruled ineligible to participate based on hours.)

A few days later, Greg Newbrough, the company’s chief operating officer, circulated a letter to workers stating that the company had already been reevaluating worker salaries before the drive was declared. It’s a claim executives often make when facing a union vote. HuffPost reviewed a copy of the letter, in which Newbrough touted Sapporo’s “significant, long term financial commitment” to Anchor and noted that workplace safety “has improved dramatically since 2015.” (The letter was sent before the fire.)

Workers tell HuffPost that managers began calling small groups of Anchor workers into a fourth-floor conference room in the brewery for meetings, which they felt were designed to sow confusion and apprehension about unions generally and the ILWU in particular. Companies often use so-called captive-audience meetings to unnerve workers in advance of an election, and multiple Anchor workers said they were shown PowerPoint presentations that contained disinformation under the guise of “educating” them about unions.

“It looked like the talking points that every union-busting lawyer gives” to their clients, said Jon Ezell, a full-time bottling line worker.

According to Ezell and other workers, management claimed that they’d have to begin paying dues even before securing a union contract and that the ILWU’s promise to waive its initiation fee for workers employed during the drive couldn’t be trusted unless workers had it in writing.

Agustin Ramirez, the ILWU lead organizer on the drive, called these sorts of claims “a complete lie.” Both he and Ezell noted that the union has not collected dues or fees from workers at a nearby veterinary hospital, where workers are currently bargaining for a contract under the ILWU.

Workers said management also warned them the ILWU could effectively force Anchor to fire workers who were found to have violated the union’s rules (which is true) and suggested that the union might take this action for minor infractions of its constitution (which is not typical). Managers even handed out copies of the ILWU’s constitution at some meetings in what workers say was an attempt to alarm them about the breadth of potential infractions that they could incur.

Neither captive-audience meetings nor misleading anti-union rhetoric is illegal. But Anchor’s managers may have run afoul of federal rules by demanding that workers remove pro-union pins in the workplace.

Patrick Machel, a part-time bar back at the brewery tasting room, said his assistant manager told him to take off a pro-union pin during his shift. When Machel balked, the manager told him to “take it up” with human resources. Machel removed his pin to avoid seeming insubordinate. A brewery tour guide said he did the same when a manager confronted him in a similar incident.

The ILWU’s Bay Area local filed grievances with the National Labor Relations Board on Feb.  26, arguing that the pin dispute violates NLRB’s rule preventing employers from barring union insignia in the workplace. The company quickly reversed course, which the workers celebrated in a tweet two days later.

🚨WORKERS WIN AGAINST UNION BUSTING!🚨
Workers have recieved confirmation that @AnchorBrewing management is reversing their previous anti-union and illegal position of banning union buttons in the workplace thanks to the efforts of Anchor workers and the ILWU legal team!

Ramirez said he wasn’t surprised that Anchor forced an election and employed common anti-union tactics, despite the progressive image of craft beer.

“It’s not the product that’s coming out of there” that dictates a company’s response to a union drive, he said, “it’s the corporation itself.”

Several municipal officials in San Francisco have also weighed in with support for the drive in recent days. “I hope Sapporo/Anchor will reconsider and abandon your anti-union campaign against employees,” wrote San Francisco District 9 Supervisor Hillary Ronen in a March 5 letter to Anchor’s chief operating officer.

There was a bright spot for workers on March 4 when Anchor agreed to pay wages for employees who lost shifts during the fire — though workers note there was no mention of backpay until “a letter that went out from the organizing committee basically demanding just that,” said Kelly. (In a statement to Bloomberg Law on Friday, an unnamed Anchor spokesperson appeared to suggest that the company made the decision on its own.)

But despite that good news, workers say Anchor actually intensified its campaign last week after the election was postponed. Instead of small-group meetings, workers were now facing one-on-one and two-on-one meetings in which managers told them that wages and promotions could be frozen for two to three years if the union went through, several workers told HuffPost. “Same gist, more intimidating,” said Belden.

In another incident in the company locker room last week, Kelly said, a supervisor repeatedly shouted “Fake news!” over him as he tried to read Supervisor Ronen’s letter aloud. “He was absolutely trying to bait me into responding,” Kelly told HuffPost.

Brewery production workers received an email Friday announcing a mandatory “safety” meeting at 7 a.m. Monday. Workers that, although brewmaster Scott Ungermann did speak about fire safety, he then veered into a long speech about how the union campaign was driving a “wedge” into the workforce and eroding trust at the company, according to multiple accounts of the meeting. Workers said they were told there were no guarantees about what would happen if they voted in favor of the union.

Still, workers HuffPost interviewed seemed more impatient than intimidated in advance of the Wednesday votes. “I think people are just ready to get on with it and are tired of management delaying,” Kelly said.

Ramirez, who has the perspective of 35 years in organizing, has managed to find some humor in the process. The workers conducted two “drink-ins” at Anchor’s Public Taps bar, both of which were well attended ― including some of the International Brotherhood of Electrical Workers who had been called in for repairs after the fire.

“They hired a union company!” said Ramirez with a laugh.